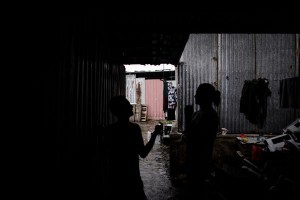 To go with HongKong-Asia-immigration-refugee,FEATURE
This picture taken on June 11, 2013 shows Bangladeshi refugees talking at a compound where asylum seekers from Bangladesh reside, in the Ping Che rural area of Hong Kong near the border with mainland China. Hong Kong may be one of Asia’s wealthiest banking and luxury hubs, but the picture is very different for hundreds of asylum seekers forced into slum-like conditions as they scrape a living in the city, say campaigners. The Ping Che region of the territory is home to a sprawl of makeshift huts made of corrugated iron plates and brick that house more than 100 people seeking protection. AFP PHOTO / Philippe Lopez / AFP / PHILIPPE LOPEZ


TELL US WHAT YOU’RE THINKING...